Years and years ago, my mom used to send me random funny things by email before memes and gifs became a daily internet routine.  One of those things was a saucy list of ‘Things You Wish You Could Say at Work But Can’t’.  I feel like the piece I stitched below summarizes the experience most of us endure at one point or another in whatever job one has. 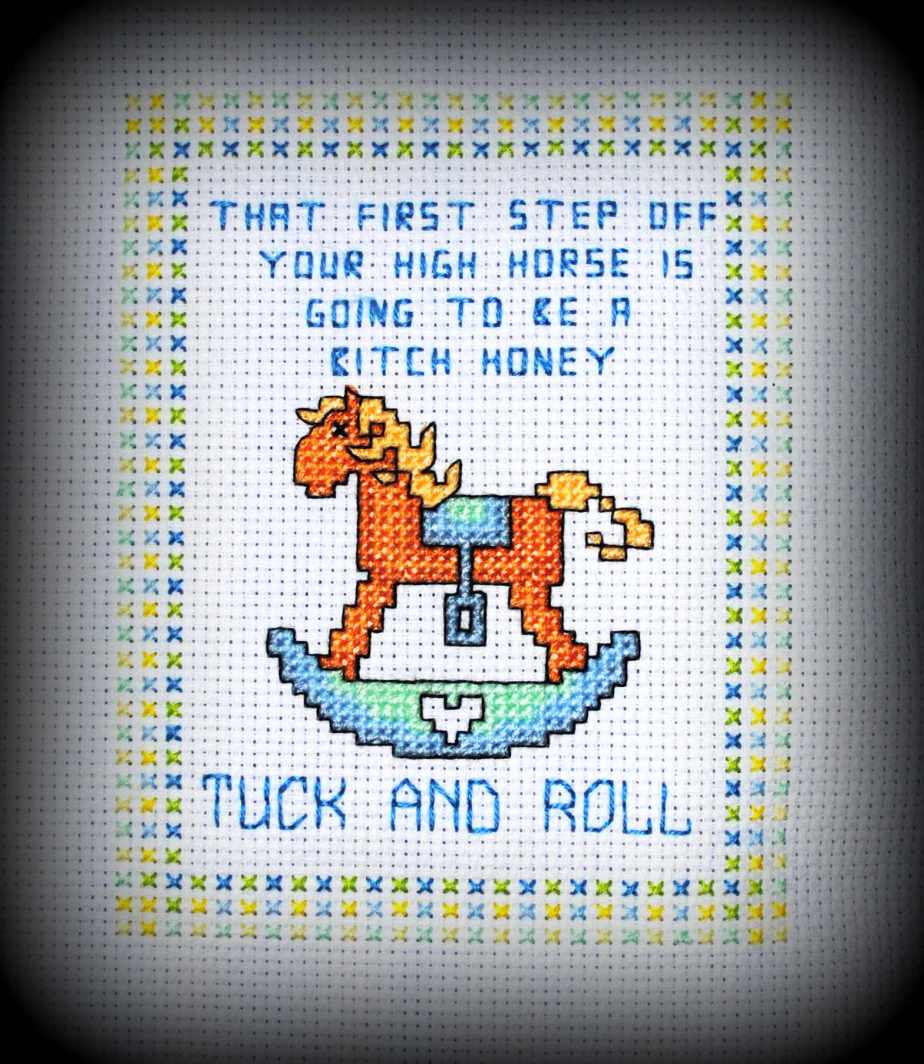 As you can see, I went super simple with the confetti stitch border, using a blend of colours that I think complement the centrepiece well.  This is a great beginner cross stitch pattern-super easy to follow and super fast to do.  I sometimes encounter beginners who give up on projects because they often take up something massive and detailed without realizing how much time and labour go into even simple projects.  I’m an experienced stitcher, and I spent a weekend on this…an evening/night watching Gilmore Girls stitching the border and top section of lettering, and the next afternoon stitching out the rocking horse, bottom lettering, and backstitching.  Others probably stitch faster, but everyone should feel like the pace they work as is just fine if the finished product they made is something they love.  But yes, I do think beginners should start on smaller, more manageable projects so they don’t get frustrated or bored, which can easily happen with epic projects.

Anyway, the subversive cross-stitch pattern Giddy Up shown here is available for sale in my Etsy shop!  Stop by!

To backstitch or not to backstitch, that is a question I often see pop up in various cross-stitching fora populating the interweb.  Ultimately, I think the decision lies with the creator and if prefer well defined lines in your work.  Of course, many complain that it takes a long time, and it can, depending on how much detail the stitcher is going for, and of course, how large the project is.

The photo below (via my instagram page) is a close up of the commissioned piece, The Debbie Downer, featured below.  As you can see, I used several DMC floss shades to give this border a bit of definition and boost and I’m happy with the result. 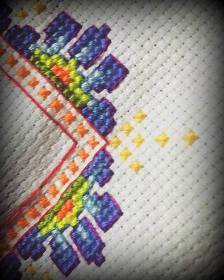 You’ll also notice that I didn’t just go for black and tried to use complementary colours here.  Sometimes when I’m backstitching, I use a black or a darker hue of the dominant colour being outlined, but one can be fairly playful with their colourways.  I encourage this!  Try it yourself  with my new Debbie Downer pattern available on Etsy!

I did all the backstitching for this piece in one go-the lettering, and the borders.  I watched three full-length films on Netflix in the doing, so yes, like cross-stitching itself, the backstitching can take some time.  Not sure which is a bit sorer today-my stitching hand, or my ass, which feels more pancake like today with all the time it spent fusing to my sofa cushion.  But the final result turned out well.  What do you think?

If you’re new to crossstitching, backstitching is a pretty basic embellishment to give your projects definition and a cleaner look.  Finding a basic diagram on google can be a mess however.

This one, from Women’s Weekly magazine is the clearest diagram I can find that requires little explanation for the newbies out there.

This basic embroidery stitch requires you to simply place your thread through the front to the back of your fabric, then move your needle several spaces away from your insertion point to bring your needle again through the fabric, this time from back to front.  When your thread is ulled back through to the front, insert your needle again into the first insertion point you made and then continue making your line accordingly.  On aida, this is particularly easy to follow as you can count spaces to make the backstitches more even in length.  Hope this was a helpful how-to! 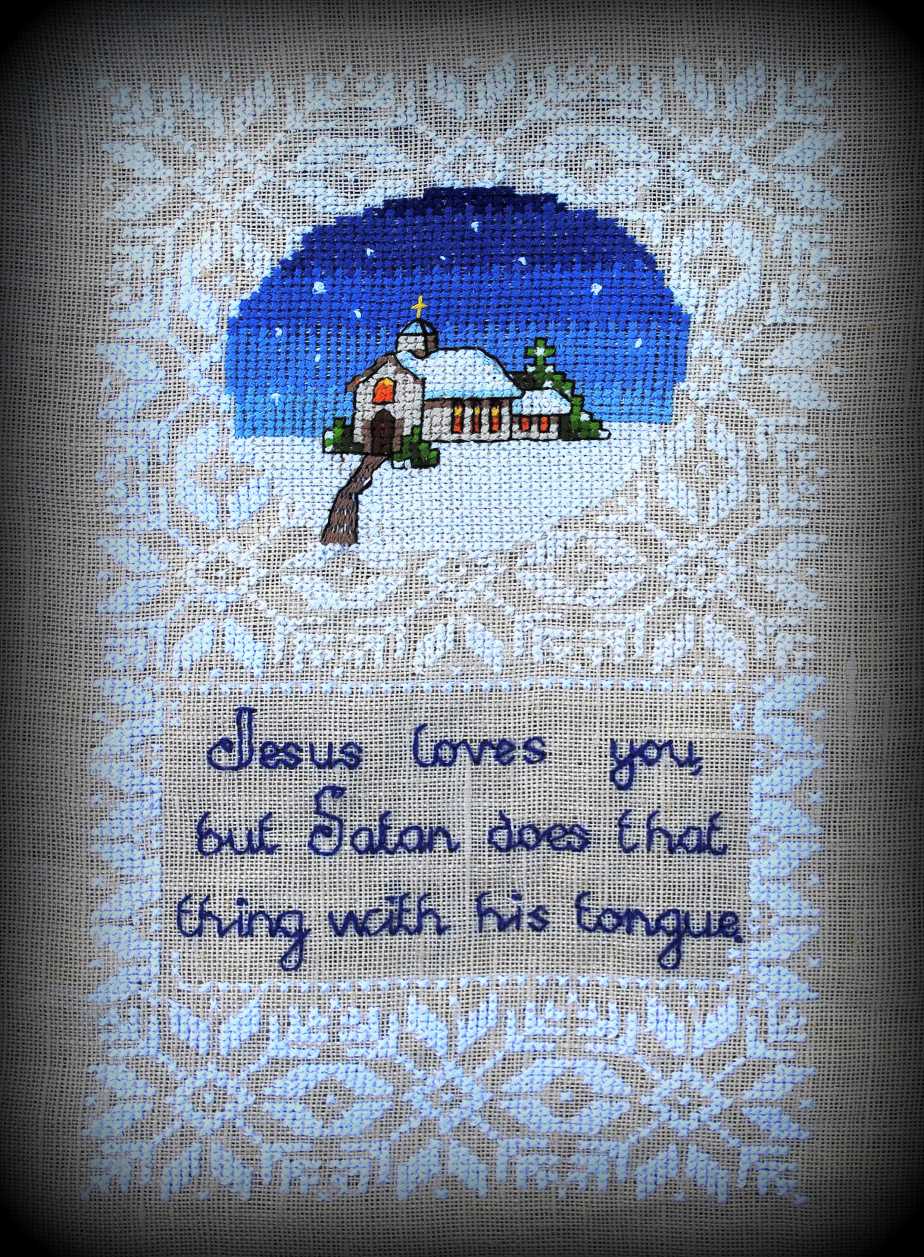 Church Tongue is my newest subversive cross-stitch pattern available in my Etsy Shop: Crafterdark-Some Pretty Bitchin’ Stitchin’.  Church tongue is a little tongue-in-mouth joke Drew Barrymore dropped back in the 90s in the film, Wedding Singer (a personal favorite), but the phrase shown here is some random drunken scrawl I came across in some shitty dive bar, somewhere.  Had to be stitched I thought, so I designed this pattern and decided to stab it into 28 ct. linen as seen here.

As discussed in my earlier post How to Cross-Stitch on Linen-The Good, The Bad, and the Ugly I had quite the struggle migrating from the usual stitching on aida cloth to linen.  Linen is flimsy and I really hate using hoops, but it’s kind of a must have.  I also struggled with how much thread to use….I settled on 2 strands over two linen threads as you can see here.  Needle size is kind of a thing too…I can see numerous places where my needle may have been just a bit too big as it separated the linen threads a bit further apart than its natural weave.  So a lot has been learned.  Oh, and yes, backstitching – I do this a lot anyway in my projects, but it was super crucial here around the church to really make it pop.  Otherwise it’s kind of washed out without the black back-stitching.  It feels tedious, but was totally worth the time in my books.

I’ve been stitching up patterns that I design myself for about six or seven years now, but only recently decided to try cross-stitching on linen.  Normally, I cross stitch on 14 or 16 point aida fabric because it’s easy to use and follow, and it’s stiff enough that I do not need to use a hoop.  But I love the look of more traditional styles on linen so I thought I would give it a try.  Practice makes perfect, and I suppose we have to start somewhere!

I purchased some 28 count oatmeal coloured linen from Michael’s and set down to practice stitching. I was surprised by the learning curve, and had to restart the project several times.  At first, I tried one over one cross stitching.  For the newbs out there, one over one means that I am stitching one single floss strand over one fabric thread.  I found this to be a little too delicate,  way too fucking small, and I couldn’t see shit as I was stitching so it looked really sloppy and uneven. There was wine.  And whining.

I then decided one over one on 28 ct. linen is next level stuff that I will learn or build the patience for later on.  So I moved to two over two (two floss strands stitched over two fabric threads).  However, when I took an initial stab, or two or a thousand on the white snowflakes shown above on the left, it also seemed uneven and too ‘open’.  Generally, I prefer better coverage so I don’t see the fabric under my stitches.  This is where things went horribly horribly wrong.

I thought “what the hell, let’s bulk this shit up” and started three over two (three floss strands over two fabric threads).  I basically considered the linen as a practice piece anyway, so I wasn’t too concerned about the unevenness of the project itself.  Next time, I’ll use cheaper scrap.  Anyway, three over two is the worst decision I’ve made in my life since, I dunno, I went to grad school or something. Just look how chunky and uneven the little church turned out!

So, I showed my WIP (work in progress) to some fellow stitching folks via my facebook page and got some great advice.


• Two over two is best on 28 ct. linen
• Don’t fucking pull the floss strands too tightly
• Don’t be so lazy and use the damn hoop
• Be fucking patient
• Drink some fucking booze
• Get a good light

• And well, if you have never stitched in your life: pull two floss strands through the back of the fabric, pass the needle diagonally over two fabric threads and pull your floss through to the back again.  Complete your X by moving your needle over behind the fabric two fabric threads away from where your needle came out the back.  Draw your floss up through the front and make an X over your first stitch to complete the cross stitch.  See the Cross Stitch Guild’s super helpful diagram above.

With the advice I got, here’s what I have produced so far:

So there you have it.  I have more to do with this…obviously fill out the left hand side, and move downward where I will add some snarky wordplay soon enough.  I’ll also do some back-stitching around the church and finish the satin stitch walkway with a few other shades of beige for a more cobblestone-ish look.  Stay tuned!

Here’s a lovely finish of my free Life Coach cross stitch pattern stitched out by Sirusi on reddit.  Would you like a free, super easy, totally cute and totally doable quick cross-stitch project to give as a gift or motivate yourself to leave the house each morning? Click here for a free pattern:  The Life Coach (no strings yo!) 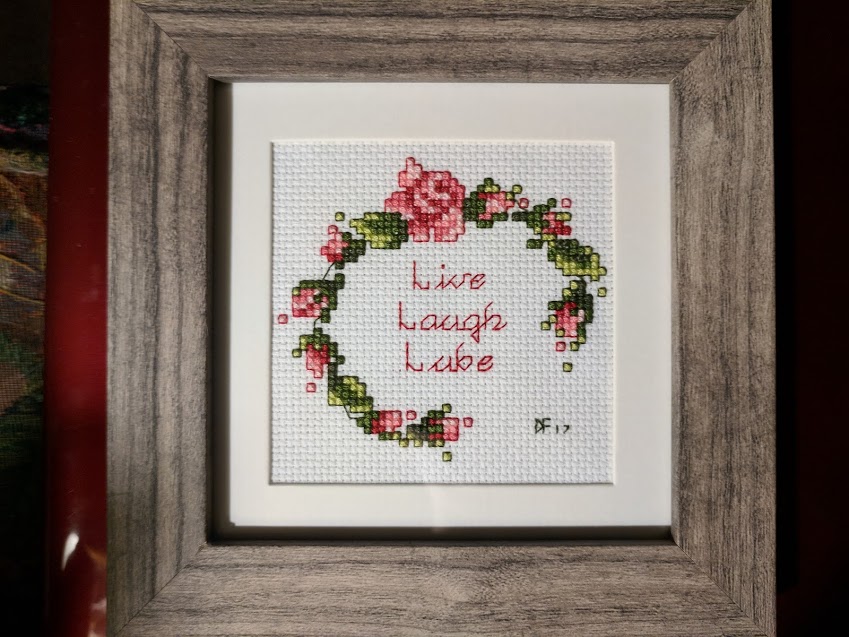 Sirusi’s lovely version uses red instead of green lettering, which I think really pops nicely.  They also opted out of doing the little back stitched bow in the bottom right arc, and I think it still looks splendid.

The project itself is really fast…you can do it in a few hours for sure, and it’s perfect for beginners, and certainly a good, fun choice of handmade diy gift if you’re in a pinch for time as well.  Have fun with Life Coach!

Find me on facebook too!  I post my etsy shop deals and free patterns there too! https://www.facebook.com/CrafterDarkonEtsy/

Meet the newest addition to the Crafterdark collection!  Muff Diver…inspired by the the beautiful art nouveau ironwork I had the pleasure to take in whilst plodding the streets of Paris…especially the Réaumur – Sébastopol station entrance to the Metro.

The pattern is available for purchase in my Etsy shop, Crafterdark: Some Pretty Bitchin’ Stitchin’.  The finished piece is also for sale and I can be reached through Etsy messenger.

Interested in purchasing a pattern or finished piece? Contact me or visit my Etsy page: https://www.etsy.com/ca/shop/CrafterDark?ref=hdr_shop_menu Thanks for stopping by!